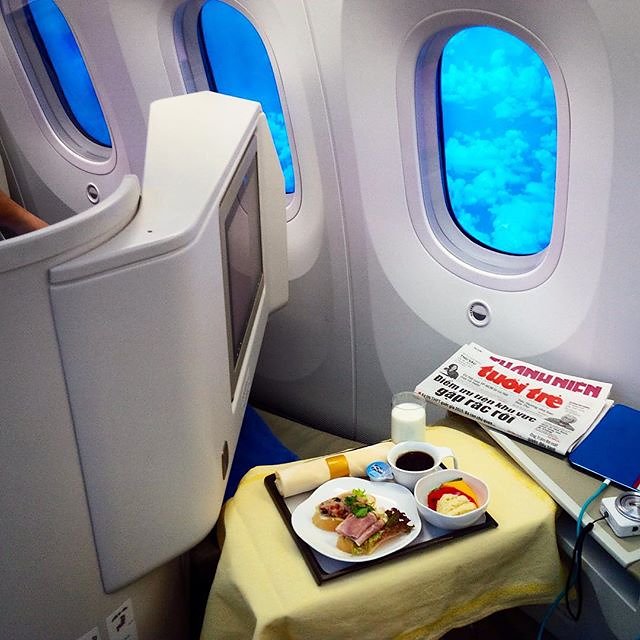 The best thing to drink on every airline – flying coach often feels like paying someone a couple hundred bucks to gently smoosh a bunch of hard but weirdly upholstered surfaces against you while also forcing you to listen to strangers’ mouth noises. Plus you get to be forcibly dehydrated and literally jerked around! It can be sort of awful.

Alcohol helps though – except for with the dehydration thing. If you have ordered wine on a plane, you’ve probably noticed that it’s not very good. This is partially because most airlines serve awful wine – also, your taste buds don’t work so well up there. That’s the bad news.

The good news is, there are a surprising number of acceptable drinking options on a surprising number of airlines — mostly because it’s been far easier for airlines to pick up good-quality craft beer than it has been to pick up good-quality wine, apparently. And if you are ever in a real pinch, a mediocre Bloody Mary is gonna be a whole lot better than a real rotgut of a Cabernet wine. After all, you need something to wash down all those snacks you brought.

Here, we’ve organized the major U.S. based Airlines by the quality of their best drinks.

JetBlue offers Lagunitas Pale Ale, a reliable beer from one of the country’s more reliable craft breweries. This is basically the Uniqlo of beer: it’s pretty well-made, most people like it, and it’s easy to find. Plus, they serve Dunkin’ Donuts coffee and Terra blue potato chips.

Alaska Airlines serves Alaska Brewery Beer, which is extremely good and also makes you think of things like reindeer, glaciers and the Northern Lights.

Virgin America used to — it merged into Alaska Airlines — serve Anchor Steam, another American classic, which was improved by the fact that you were drinking it in a plane that felt like a weird amazing alien nightclub served by accommodatingly cheery attendants. Old Bonus: if you were into lighter beer mixed with zesty things, they offered a michelada.

Economy Coach Class
Southwest has Tanqueray Gin, which means you should order a gin and tonic.

Spirit Airlines also has Tanqueray, which means you should order a gin and tonic.

Allegiant Airlines also has Tanqueray, so a gin and tonic it is. Or you could switch it up by getting a gin and sprite.

Frontier Airlines, the airline that makes you pay extra to carry on a bag, has no top-shelf liquor to speak of, which means your best bet is a Bloody Mary and even more dehydration than you’d normally expect.