Not sure where to indulge on your next Walt Disney World vacation? Take it from us: these magic-infused, character-led Disney restaurants will make your next trip to Orlando extra-special, if not downright unbelievable.

Be Our Guest
At this Beauty and the Beast-themed eatery inside the Magic Kingdom, guests dine within Beast’s castle, enjoying French fare and a dessert of “grey stuff” beneath the stunning hand-painted ceilings of the Grand Ballroom, in the secret West Wing as the famed rose looms nearby, or within Belle’s beloved castle library. A meal here feels like stepping into the movie itself, a pleasure made only more exciting with an appearance by the Beast, proving this Disney World restaurant lives up to its park’s name.

Boma – Flavors of Africa
Part buffet, part culinary adventure, Boma has remained a quintessential Disney World restaurant for its accessible tastes of African specialties and spices. Located inside Disney’s Animal Kingdom Lodge, guests enjoying either breakfast and dinner at the unique locale have the added bonus of exploring the hotel’s savannahs afterwards, making for a special treat beyond the famed “zebra domes.”

California Grill
This grand hotel restaurant high atop Disney’s Contemporary Resort receives high marks for its impeccable food, stellar wine list and bountiful brunch, but the bird’s eye view of the Magic Kingdom and its surrounding locales simply cannot be ignored. Whether you indulge in its top-notch sushi or build-your-own-bloody marys, California Grill offers an incredible perspective that continues to enlightens Disney fans, particularly with its prime viewing area for evening fireworks over the castle.

Cinderella’s Royal Table
Sure, this is one of the toughest reservations to grab at Walt Disney World, but this eatery that is actually found inside of Cinderella Castle, is a dream for young royals. Diners can peek at Magic Kingdom’s Fantasyland through stained glass windows as they are greeted tableside by a rotating group of Disney princesses. As for Cinderella herself? She greets guests within the entrance at the castle’s grand hall, allowing diners at Cinderella’s Royal Table to truly feel invited by the namesake princess.

Coral Reef Restaurant
With an unparalleled view of EPCOT’s majestic undersea tank, which hosts nearly 100 species of tropical fish, as well as sharks, rays and sea turtles, this Disney World restaurant would be stellar regardless of the menu. Still, it serves some of the best seafood selections in the park, as well as delightful sharable bites like creamy crab-spinach fondue and crispy calamari.

Jiko The Cooking Place
This romantic Disney World restaurant inside Disney’s Animal Kingdom Lodge boasts the largest collection of South African wines outside the region, as well as some delightful entrees and African flavors, like Botswana-style short rib and peri peri chicken that can’t be found anywhere else at Walt Disney World.

1900 Park Fare
Enjoy all the elegance of Disney’s Grand Floridian Resort at this Disney World eatery, where food is served buffet-style and Disney characters like Mary Poppins, Alice in Wonderland and the Mad Hatter interact with guests. The perfect idea for mid-morning brunch, the inherent charm of the amusing conversations of fairy tale characters and Victorian-era decor combine for an essential Disney World dining experience.

Chef Mickey’s
This cafe which features the main mouse at the helm, serves up standard Disney World dining fare as well as one of the most popular Disney character dining experiences on property. Housed within the lobby of Disney’s Contemporary Resort, the colorful buffet-style restaurant lets guests enjoy favorites like Mickey waffles and delectable meats while Mickey and table, making pitch-perfect vacation memories.

The Crystal Palace
Simply put, breakfast at this glass-enclosed glory is worth the early wake-up call. All-day visits by Winnie The Pooh and friends Tigger and Piglet make dining here at any time a dream, but by offering both old-world Victorian charm and a buffet that is pleasing to every family member, it’s no surprise it’s become the most popular park brunch within Walt Disney World dining.

The Hollywood Brown Derby
Though the iconic California location it’s based on no longer stands, this Disney’s Hollywood Studios eatery remains an ode to Tinseltown’s finest gathering place. Old world fare like cobb salads — which were invented at the original Brown Derby — and its grapefruit cake are served along hearty proteins like a charred filet of beef and andouille-crusted chicken, as well as one of the finest cocktail menus in the park. If you can’t get a table, there’s always the outdoor lounge, which seats first-come first-served, making it easy for everyone to toast the good ol’ days.

San Angel Inn
Set in front of ancient Mayan ruins and cast in perpetual night sky, this Mexican restaurant at Epcot’s World Showcase is full of charm without ever becoming quirky. As one of the only Disney restaurants with an attraction passing through it, boats from Gran Fiesta Tour Starring The Three Caballeros gently glide by diners enjoying favorites like chile relleno, mole poblano and salsa verde-slathered pork. With the night sky twinkling above, you’ll swear you’re outdoors, but no, it’s not the flavored margaritas talking. It’s just the magic of Disney World dining’s most transportive restaurant.

Le Cellier Steakhouse
Wondering what could possibly be served at Epcot’s beloved Canadian restaurant? There’s poutine, the gravy and cheese curd-topped french fry delight, which here is done two ways, as well as the item that keeps guests coming back for more: Canadian cheddar cheese soup. The menu as a whole is divine, with entrees like venison osso bucco and root vegetable gnocchi and an indulgent dessert menu that could keep you warm all winter long, but it’s the steaks that leave guests shocked that they are, in fact, still in a theme park. That, paired with the ambiance of this underground cellar makes it just as worthy of a visit. 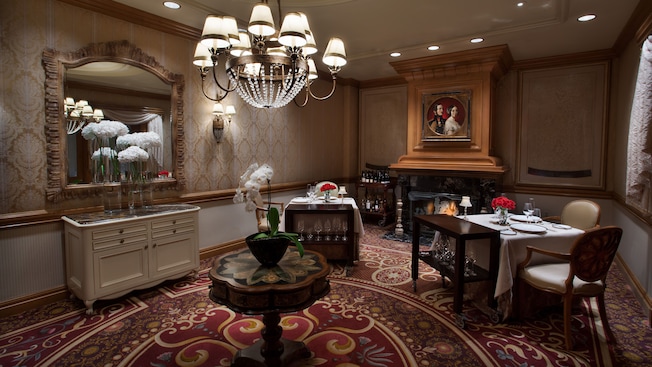 Victoria & Albert’s
If you’re thinking about a Disney World restaurant proposal and really want to make sure they say yes, this is the place to pop the question. As the most formal restaurant Disney World dining has on offer, its elegance comes not just from its location inside Disney’s Grand Floridian Resort but from the food, which has earned it an AAA Five Diamond Award for 16 consecutive years. Prix-fixe tasting menus change daily, serving multiple courses of dishes highlighting best-of-the-best ingredients sourced from around the world, as well as a fully vegetarian option to those with dining restrictions and a chef’s table experience. It is a once-in-a-lifetime formal dress code multi-course degustation meal that just happens to be on the property of Disney’s grand hotel, and one you will never forget.

Monsieur Paul
For true gourmands visiting Walt Disney World, this culinary escape in the style of famed French chef Paul Bocuse is a must when visiting Epcot. Housed inside the World Showcase’s France pavilion, Monsieur Paul exclusively serves dinner, offering delicate and elegant takes on French delicacies like roasted duck breast, oxtail truffle soup covered in puff pastry and its signature black sea bass, which comes covered in “potato scales,” Ratatouille’s Remy won’t be around to cook up his namesake dish, but La Sphère, a chocolate orb that melts before guests’ eyes, should be just as delightful.

Narcoossee’s
Get a taste of classic Disney World dining at this sophisticated seafood eatery, located just beyond Disney’s Grand Floridian Resort. Narcoossee’s has earned its reputation for surf-and-turf flavors done in a multitude of ways, but its shrimp-topped pasta and seafood entrees are equally divine. While waterfront views of the Magic Kingdom’s evening fireworks make Narcoossee’s a gorgeous option for dinner, particularly for couples residing at the Grand hotel or beyond, it also offers a spectacular Sunday brunch, with specialty beverages, pastries and appetizers served alongside a choice of entrees, rivaling most other Disney World restaurant morning options.

‘Ohana
Meals at Disney’s Polynesian Village Resort’s bustling restaurant are this warm and welcoming, channeling relaxing island vibes. Breakfasts offer standard morning fare with appearances by Lilo & Stitch, but dinners swap the beloved visitors for an all-you-can-eat Hawaiian feast with pork dumplings, sweet chicken wings and a never-ending parade of sweet-and-sour chicken, spicy shrimp and sirloin steak skewers. There’s plenty of entertainment at night for the young’ns too, but they may be too busy enjoying one of Disney World dining’s most famous dishes instead: the ‘Ohana bread pudding, which comes topped with ice cream and a lip-smacking bananas-caramel sauce.

Sci-Fi Dine-In Theatre Restaurant
If there was an award for the most themed Disney World restaurant, this unique spot at Disney’s Hollywood Studios would surely be its winner. Styled as a permanent drive-in theatre, the tables and boots are set inside mini convertibles, facing an endless loop of quirky old ‘50s movies. The menu is Americana to its core, offering homestyle carhop classics like Angus burgers, ice cream sundaes and house-smoked pork ribs. With the addition of chicken and salmon BLTs, salads and pastas, it’s experience you can’t get anywhere besides Disney World dining.

Trail’s End Restaurant
You can ride horses and sleep in cabins at Disney’s Fort Wilderness Resort, but chowing down on delicious southern-style eats is what this woodsy enclave is best known for. With its buffet boasting chili, smoked pork ribs and the best fried chicken you’ll find at Walt Disney World, it features all the culinary delights of the Hoop-De-Doo Musical revue next door, but with a sole focus on the food. And as for that chicken? Crunchy, crispy and perfectly moist inside, it’s a Disney delicacy that must be eaten to be believed.

Yachtsman Steakhouse
Indulge in the best house-aged steaks at Disney World restaurants at this elegant New England eatery. No matter if you pick the Japanese Wagyu Strip Loin, prime rib or Kansas City strip steak — with a side of truffle mac & cheese or a twice-baked potato, of course — the choice cuts are endless here at Disney’s Yacht Club Resort. Whether or not you’re taking advantage of an ideal romantic night out at Walt Disney World, you’re in for a treat at the best of Disney resort dining.

Biergarten Restaurant
It’s Oktoberfest 365 days a year at this Disney World restaurant tucked inside the Germany pavilion of Epcot’s World Showcase. Take in live music from an oompah band, delight in all-you-can-eat pork schnitzel and bratwurst and sip steins of German Hefeweizens and Pilsners at this quintessential Disney World dining experience.